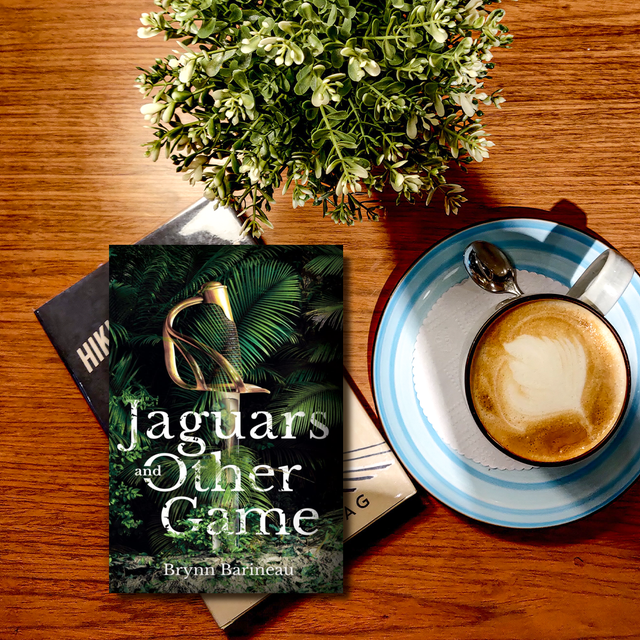 Jaguars and Other Game *Signed paperback*

Jaguars and Other Game by Brynn Barineau

1808 Rio de Janeiro. The Portuguese Court flees Napoleon to Brazil. For the first and only time in history, a European royal family transfers its capital to an American colony.

Maria Azevedo and her sister, Isabel, have spent years transporting gold through the jungle to Rio’s port. They can dispatch jaguars and smugglers with a crack of a whip, but the Prince Regent’s efforts to civilize the city have them looking over their shoulders. More soldiers. New laws. Full stocks.

Then the sisters’ childhood friend is wrongly imprisoned for murder.

Maria knows the only hope a Brazilian has for justice in the Court’s Rio is if someone drops the real murderer on the palace steps. The sisters recruit Victoria Cruz, a Portuguese refugee in service to Mad Queen Maria, and together they begin hunting a murderer through a city teeming with corruption.

The women soon discover a conspiracy that reaches the heart of the Portuguese court. To save their friend from execution, they’ll have to decide what they’re willing to risk for justice, love and family.

ADVANCED PRAISE FOR JAGUARS AND OTHER GAME:

"An addictive tale with drama, history, and delightful protagonists."

"A thrilling rollercoaster of a novel filled with action, humor, and romance."

"In vivid and energetic prose, Brynn Barineau portrays a fascinating chapter in Portuguese history, when the court fled Lisbon for Brazil to escape Napoleon’s invasion of their country. Jaguars and Other Game has all the elements of a rollicking good story – action and adventure, political intrigue and corruption, romance and betrayal. The result is a lush tapestry in a fascinating historical setting. Hunt it down at your local bookstore, and you won’t be disappointed!"

"A twenty-one-gun salute to Brynn Barineau and her tale of three bold women who more than held their own in the rough-and-tumble world of 1808 Rio de Janeiro. This atmospheric, lively debut had me turning the pages to cheer on the clever trio. A dazzling adventure!"

-Lynn Cullen, national bestselling author of THE WOMAN WITH THE CURE and MRS. POE